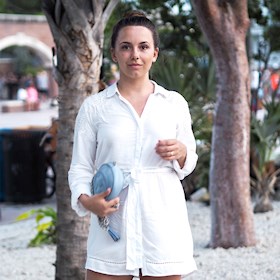 Universal Studios was the biggest disappointment of all time! Okay, I'm exaggerating. But I had been looking forward to the Studio Tour and Wisterlia Lane, but it was closed because they were using it to film :( We're talking massive disappointment. Other than that, all the lines were a 60+ minutes wait, so we only got to go on the Studio Tour and Water World. They were both really cool anyway though!

We went straight home afterwards, but time flies, and all of a sudden it was 11 PM and we'd only had dinner and played blackjack. Tomorrow we're finally going to the beach ;-) It is way to hot to do anything else during the day, but I'm not so sad about that, he he...